On 21 December 2019, the parties to the Vocus Class Action entered into an agreement to resolve the proceeding for the settlement sum of $35m, subject to approval by the Court (Conditional Settlement).

The Notice of Proposed Settlement to be sent to Group Members will be settled early February and the hearing of the Settlement Approval Application is set down for 24 April 2020.

ICP is managing a shareholder class action run by Slater & Gordon Lawyers on behalf of aggrieved Vocus investors who suffered losses due to alleged breaches of disclosure obligations and misleading and deceptive conduct. 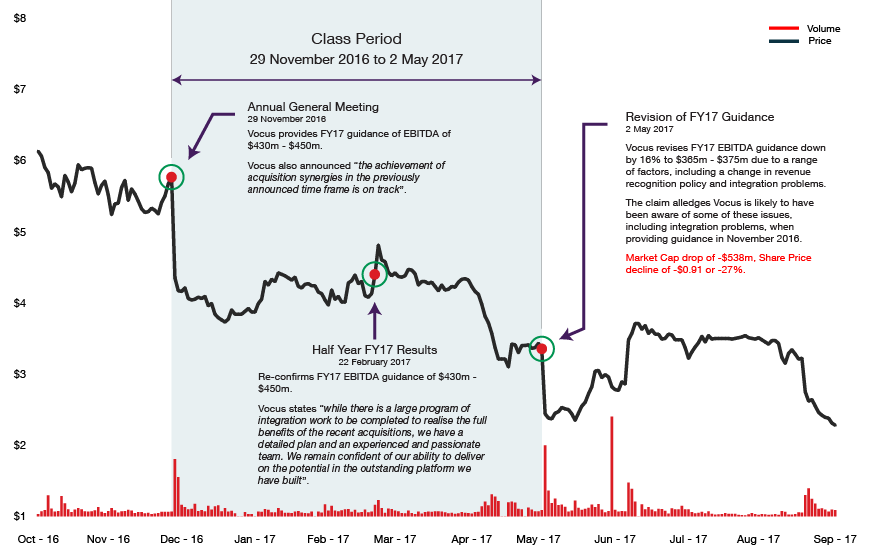 Vocus is one of Australia’s largest telecommunications companies, and has traded on the ASX since 2010. Vocus held its Annual General Meeting on 29 November 2016, and provided guidance for FY17 as follows:

On 22 February 2017 Vocus re-iterated the FY17 guidance and expressed confidence in its ability to deliver. On 2 May 2017, Vocus downgraded its FY17 guidance as follows:

The claim is based on allegations that Vocus is likely to have been aware of some of the factors noted in the FY17 Downgrade back from at least 29 November 2016, consequently misleading the market with its FY17 Guidance. In particular, that: