In November 2019, the parties reached an in-principle agreement to settle the ICP funded class action, together with a related class action being conducted by Slater & Gordon, for $49.7m, inclusive of GST and costs. The agreement is subject to several conditions, including Court approval.

The hearing of the application for Court approval of the proposed settlement will be held on 13 March 2020.

The following information is an overview of the claim: 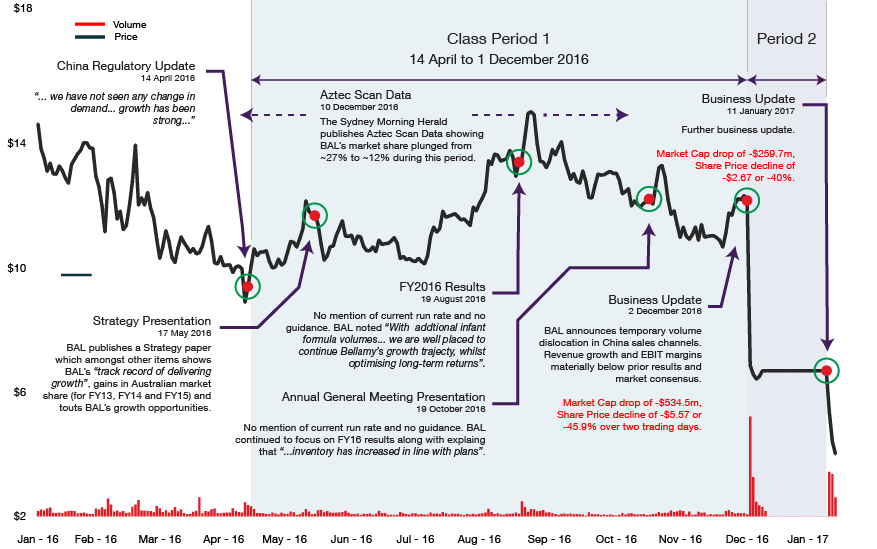 It is alleged that on and from 14 April 2016, BAL knew or ought to have known that market consensus concerning forecasts for its FY17 revenue and EBIT margin were materially inconsistent with information known to BAL and relevant to its revenue and EBIT margin outlook. BAL failed to disclose this information until 2 December 2016 and 11 January 2017, respectively. When the market became aware of this information, BAL’s shares dropped $5.57 per share and $2.67 per share, respectively.

Shares Traded in the Period

Parties who purchased shares in Bellamy’s in the period from 14 April 2016 to immediately prior to the commencement of a trading halt in Bellamy’s Securities on 12 December 2016 (inclusive) and who have signed a funding agreement with ICP on or before 13 September 2017.

As of 13 September 2017, registration for the class action against Bellamy’s Australia (ASX:BAL) is closed to new group members.