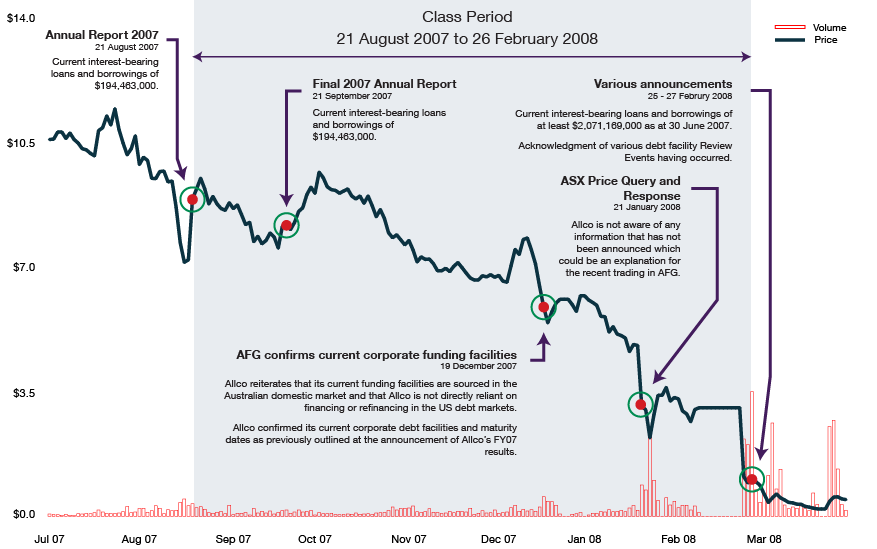 Counsel for the Applicant

(a) at sometime during the period commencing on 21 August 2007 and concluding on 27 February 2008 acquired an interest in ordinary shares in Allco; and
(b) suffered loss or damage by the conduct of Allco, David Coe and/or KPMG.

Open class with Opt Out Notice expiring on 21 October 2014. Application for common fund failed. All other proceedings are statute barred.

Allco operated a financial services business specialising in structure asset finance, funds management and debt and equity funding, and was a major player in the leasing of aircraft, ships and other vehicles.

The claim relies upon two main arguments:
(a) Between August 2007 and February 2008, Allco did not disclose its true current liabilities to the market; and
(b) From 1 November 2007 onwards, Allco should have informed the market of a review clause in the facilities with its lenders.

Allco is the primary defendant in the cases. David Coe’s Estate is joined, alleging he was involved in Allco’s breaches. Allco’s auditors, KPMG, are also being sued over the misstatement of current liabilities in the 2007 Annual Report.

The claims cover shares in Allco purchased between 21 August 2007 and 27 February 2008. The Respondents are cross-claiming against each other.